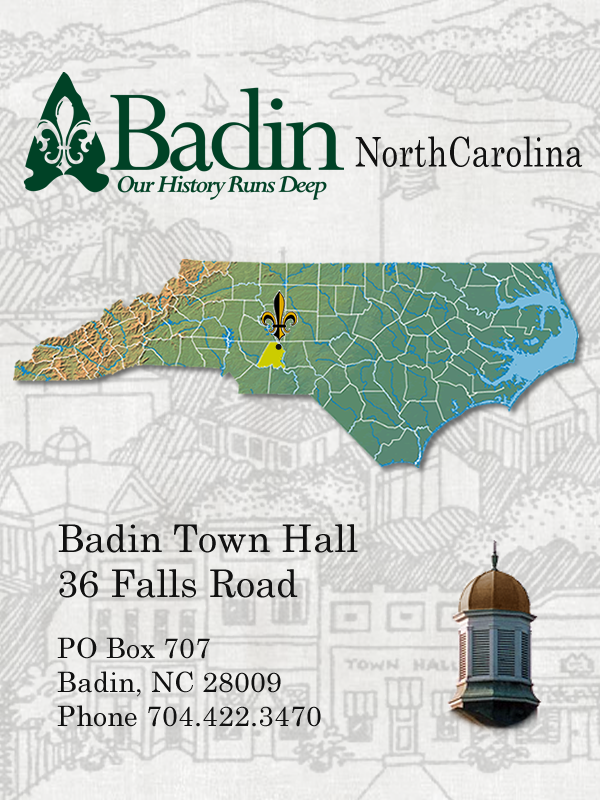 Follow a North Carolina Scenic Byway as it curls under Morrow Mountain, winds through the lush fields of Valley Drive and delivers you gently into the Town of Badin. Recognized on the National Register of Historic Places, this French flavored village at the foot of the Uwharrie Mountains in northeastern Stanly County offers a pleasant pause in a quaint setting.

Drop by the Town Hall for a map of the area, a walking tour, or a little literature about the town. Take a walk around the village, down narrow lanes, past old Edwardian era French Colonial homes with entry bridges over rock-lined, French-built storm drains. Amble through the pines up to the 1913 Badin Inn for lunch.

Stroll back to the southern end of Badin Lake to the boat landing and the beaches. Have a swim before you spread a picnic on the grassy slope by the water, or settle at one of the many tables dotted beneath the trees. Drop a line in the lake and wait for that big fish to bite - you won't be the only one. Herons, seagulls, ospreys and a few bald eagles fish here. Launch your boat and sail across the wide open expanses of the lake. Land on a deserted island. Take a look at Uwharrie Point with its plush lakefront homes and championship golf course. Sail back to Badin for a refreshing drink and a chat with the locals. French architecture and a rich history, skillfully retold in Badin’s historic museums, add to a town with outdoor recreation roots as old as the hills. Ancient native culture, Badin Lake, Falls Reservoir, the historic town, Morrow Mountain State Park and Uwharrie National Forest all nestled together, make Badin a true gem in the Uwharrie region.

A Brief History of Badin

In the spring of 1913, French company, L'Aluminium Français, began work on a dam at the narrows of the Yadkin River - which becomes the Pee Dee River a few miles downstream - to provide power for an aluminum smelter. A small town was designed to house company workers and engineers. It was to be built along the newly-formed lake, and named for company president, Adrien Badin.

Following the outbreak of World War I, the company's credit lines were redirected toward the war effort, ending its run at an ambitious construction project in Badin. The Mellon Company of Pittsburgh, Pennsylvania, with its aluminum industrial arm, Aluminum Company of America (formerly ALCOA, now Alcoa Inc.), bought the partially complete company town in November, 1915.

French industrialists had completed some of the first planned structures, a few plant buildings, a clubhouse for single male employees and visitors (now the 1913 Badin Inn), a plant manager's residence, and single family homes along Henderson Street. Work had also begun on 150 apartments, but that project was delayed three years. Bungalows were built along Tallassee Street, cottages on Pine Street, and a women's annex added to the main clubhouse on the hill.

By 1917, Badin was a permanent settlement with a hospital (Stanly County’s first), a 20-room school, a grand theatre, and several brick commercial buildings. The town was progressive in the state with regard to personal equality standards of the time, offering housing and cultural facilities for both black and white workers alike.

With the automobiles and improved roads of the roaring 1920's, many Badin workers left the narrow, curvilinear town streets behind and moved into larger towns. In time that trend became the norm and the population shrank from approximately 5,000 in 1926 to just under 2,000 residents today. In 1983, the storied town of Badin was acknowledged on the National Register of Historic Places, and in 1990, the town was incorporated.

Today, this peaceful garden-city design village with its picket fences and tended gardens provides a rare look at characteristics common to North Carolina company towns, but with the added attraction of truly unique French Colonial architecture.

Text adapted from the Badin brochure. 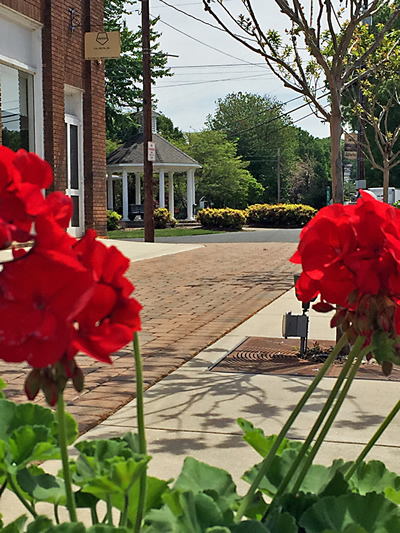